An Education: a stolen Speed map 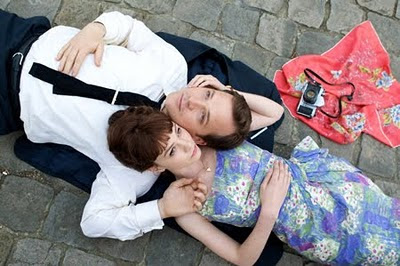 I recently watched the 2009 movie, An Eduction, which takes place in and around London in 1961 and is about a 16 year old girl, Jenny Mellor, who meets a man, David Goldman, almost twice her age, with whom she has an affair that ends unhappily. I thought the movie was terrific, but I was definitely surprised to see that a seventeenth-century map by John Speed played a cameo role.

While David is an appealing fellow, charming everyone in Jenny's family, he soon turns out to be something of a rogue. This all seems fairly harmless, and indeed is part of David's charm, until the inevitable truth come out that David is married, has a child, and has had similar affairs with other young woman in the past. I was going along with this plot line quite happily until about mid-way through the film when one particular scene put me right off David and his roguishness. 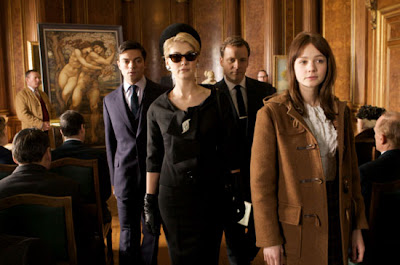 In this scene, Jenny, David, his friend Danny, and Danny's girl friend Helen are driving around the British country-side when they see a house-for-sale sign. Unexpectedly, David pulls over and he and Danny march off to view the house, sternly insisting that Jenny not join them. This mysterious attitude is soon explained when David and Danny stroll out of the house with a framed map in their possession, quickly piling into the car and driving off.

It is clear that the map was stolen from the owner of the house. Jenny is upset by this episode, to which David replies:

"It's an old map. A Speed. Poor dear didn't even know what it was. It's a waste. It shouldn't spend its life on a wall in...wherever the hell we were. It should be with us. We know how to look after it properly. We liberated it."

Well, right there I was totally put off David, though Jenny decided this wasn't so bad, thus continuing on her fateful path towards her deeper disappointment in the end.

Now, my wife tells me I am a prude about movies. Unethical behavior (criminal or sexual) is the foundation of many good movies, but I must say that I do not like it when the movie implies this behavior is just fine or at least can be "winked" at. And to steal a map! That really got my goat. I knew that if David was stealing old maps, he was definitely not a person that Jenny should hitch her wagon to! Quite honestly, if it had all turned out well in the end, I think I would not have liked the movie half so much as I did (I think my wife is probably right....) 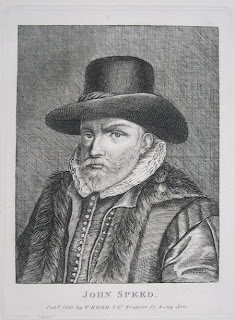 So what was it that they stole? A map by John Speed (1552-1629). Speed is probably best known for his Theatre of the Empire of Great Britaine, first issued in 1611 and then several times again over the next few decades. Speed spent over 15 years assembling the information for this atlas, which contains maps of the entire British Isles, the individual nations, and separate maps for the counties. In 1627, Speed produced his A Prospect of the Most Famous Parts of the World, which included maps of the rest of the world. 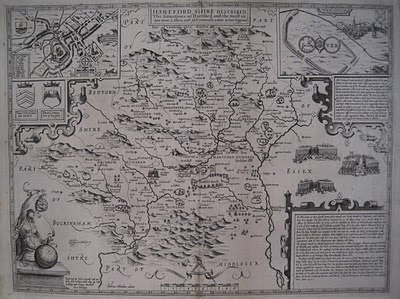 In many ways, it was Speed's maps which spurred the development of map collecting in the 20th century. Speed's maps are very attractive, with many decorative features such as coats-of-arms, city plans, vignettes of battles, and images of costumed figures. Dealers discovered that if these maps were colored (and almost all were issued uncolored), they would be decorative enough to appeal to the general public and so these became the bread & butter stock for many British dealers. I think that the Speed maps gave dealers enough business to encourage the trade and also brought in enough new buyers that this really was the genesis of modern map-collecting. 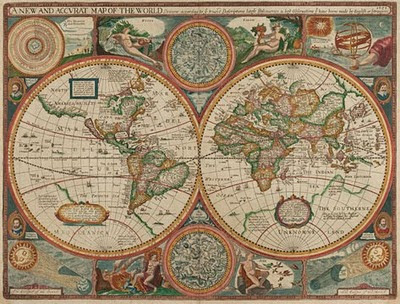 Be that as it may, Speed maps became very popular in the 1950s and 60s, and so they remain to this day. His maps are quite expensive, ranging from the mid-hundreds to over $20,000 for his world map. So, it is not surprising that David, who obviously did not have a robust ethical sense, might want to steal one when he saw the opportunity.

One of the interesting things about An Education is that it is based on a real-life memoir of the same title by Lynn Barber, a newspaper writer and interviewer. It turns out the theft of a Speed map was an actual event in her relationship with her older lover.

One weekend I was moaning - I was always moaning - "I'm bored with Bateman Street", so we drove out towards Newmarket. At a place called Six Mile Bottom, I saw a thatched cottage with a For Sale sign outside. "Look, how pretty," I said. "'Why can't you buy nice places like that, instead of horrible old slums?" "Perhaps we can," said Simon, so we bounced up to the cottage and an old lady showed us round. I was bored within minutes, but Simon seemed unconscionably interested in the bedroom corridor which he kept revisiting. Then I saw him going out to the car, carrying something.

Eventually we left and went for lunch at a hotel in Newmarket. We were having a rather lugubrious meal when two men came into the dining room and one pointed the other towards our table. The man introduced himself as a detective. He said: "We've had a complaint from a Mrs so and so of Six Mile Bottom. She says a couple visited her cottage this morning and afterwards she noticed that a valuable antique map by Speed was missing from one of the bedrooms." "Oh, Simon!" I said. He shot me a look. "Perhaps we could have this conversation outside," he suggested. He went outside with the policeman. I waited a few minutes and then went to the Ladies, and out the back door and away down the street. I had just enough money for a train back to London. I hoped Simon would go to prison.

He didn't of course; he bounced round to Clifden Road a few days later and took me out to dinner. "How could you steal from an old lady?" "I didn't steal. She asked me to have the map valued." "No she didn't - I was with you." "All right, she didn't ask me. But I recognised that the map was by Speed and I thought if I got it valued for her, it would be a nice surprise."

I knew he was lying, but I let it go. I said: "If you ever really stole something, I would leave you." He said: "I know you would, Minn." But actually I knew he had stolen something and I didn't leave him, so we were both lying.

Unfortunately, I couldn't tell from the very quick view of the map in the movie what the map was of, and of course the original memoir doesn't say what Speed map it was. So what would this "valuable" map have been worth in 1961? My only sources for this are the early 1960s issues of Ken Nebenzahl's catalogues, which do list a number of Speed maps. Most of the country maps were listed for about $20 to $35 (today these are in the low four figures), while the better American regional maps were $125 to $150 (today these sell in the middle thousands). Based on this, I would think the world map might have been as much as $200-$250.

So what does this mean in today's dollars? It means that if they had a comparable price today, the country maps would be sold for between about $150 and $250, the regional American maps $900 and $1,100, and the world map maybe $1,500 to $1,800. Makes you wish you could go back and stock up on these maps! I would be interested to know what map it was that Lynn's lover stole, but in any case, this story--both in the movie and the memoir--is an interesting one and it does show the notoriety of the maps of John Speed even half a century ago.
Posted by Chris Lane at 4:04 PM