In my last blog I wrote about John Trumbull’’s paintings of events in the American Revolution and of the engravings that were made from three of these paintings: the Battle of Bunker Hill, the Death of Montgomery, and the Declaration of Independence. Trumbull had intended to make engravings of an entire series of his paintings, but it appears that these were the only ones he succeeded in bringing to press. The first two, produced in the late eighteenth century, were engraved by European craftsmen, as Trumbull could not find an American engraver with sufficient skill, but the last, made early in the following century, was engraved by the American Asher B. Durand.

I say that it appears that these were the only three paintings Trumbull was able to have made into prints because there is a fourth engraving of a Trumbull painting which it is possible that he was involved in having made. This is a very rare print which, in fact, is something of a puzzle.

The Trumbull images have been very popular with printmakers over the years, copied by other publishers into prints from early in the nineteenth century until the present day. These copies range from moderate sized, separately issued engravings to small book illustrations to popular lithographs by firms like Currier & Ives to modern color reproductions. The most unusual of these is a print of the Battle of Bunker Hill engraved by John Norman (ca. 1748-1817). That print is quite large (almost exactly the same size as the Müller engraving), may have been engraved in the eighteenth century (even possibly before the Müller engraving), and may (like the Müller engraving) have been commissioned by Trumbull 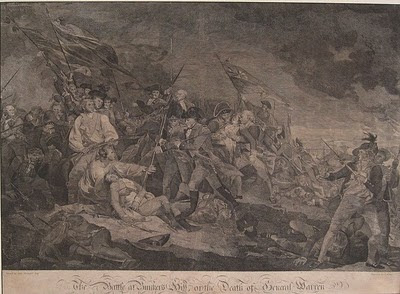 The print in question is entitled “The Battle of Bunker’s Hill, or the Death of General Warren.” The only credits on the print are “Painted by John Trumbull, Esq.” and “Engraved by J. Norman.” The print is 19 1/2 x 29 1/2 and created by the joining of two plates. There is no indication of publisher, nor of place or date of publication.

John Norman trained as an engraver in London and in 1773 he emigrated to Philadelphia, where he continued in his trade, producing mostly small engravings. In 1781, Norman moved on to Boston where he was particularly involved in engraving maps, becoming an important figure in the Boston chart trade. One of his most important works was the twelve plate “An Accurate Map of the Four New England States,” published in Boston in 1785.

Most of Norman’s earlier plates were copies of European models and the quality of his work is rather crude. The engraving of the Battle of Bunker Hill appears to fit this picture nicely. It seems to be a copy of a European model (Müller’s engraving) and it is definitely crudely done. The print is quite detailed and large, but the engraving quality is really rather poor. So, at first glance it appears that what we have with the Norman print of the battle of Bunker Hill is something fairly common of the period, a crude attempt at copying a European-made engraving.

The problem with this is that the Norman engraving really doesn’t fit this story that well. It just doesn’t make complete sense. A separately issued print like this would have been produced on speculation, with the intent of making money from sales, and who would have had the resources and interest in paying for such a print? This was not just a cheap copy of Trumbull’s image, but a large, elaborate and clearly expensive print. There is no evidence that Norman himself had the resources to undertake such an expensive proposition nor does it seem he ever had any inclination for such ventures.

But who else would, between 1798 (the date of publication of the Müller engraving) and 1817 (Norman’s death), have commissioned such an elaborate and expensive plate from an American engraver of, at least, suspect ability? Trumbull’s own print of the battle of Bunker Hill would have been readily available to anyone who wanted such an engraving and it did not sell that well. I can see someone producing a cheap copy, as the subject would likely have been fairly popular, but not such an expensive and elaborate copy when the original was still around. So if Norman himself did not undertake the production of this print and it doesn’t make sense that another publisher would have, who did?

There are only two names that appear on the print, Norman’s and Trumbull’s. Since we have ruled out Norman, let’s look at the other, John Trumbull himself. Why would Trumbull have commissioned an American engraved version of the Battle of Bunker Hill? There are actually a couple of possible scenarios that have me thinking that one of these is likely the true story of the Norman print.

Trumbull’s two European-made engravings, of the Battle of Bunker Hill and the Death of General Montgomery, did not sell well, but in 1817 Trumbull decided to try again by producing a print of his image of the Declaration of Independence. Initially he hired English engraver James Heath to do the work, telling James Madison that he did not believe an American engraver had the experience or skill to produce a quality engraving of this magnitude. There was an outcry against using a European engraver for such a quintessential American subject, so this is when Trumbull turned to the American Asher B. Durand.

It seems possible that at some point previously Trumbull had heard the grumblings about his American subjects having been engraved in Europe and that he thought his prints might sell better if he had an American re-engrave them. He might then have chosen John Norman to do this re-engraving because Norman had shown himself capable of engraving on a large scale, for he had made the twelve sheet “Map of the Four New England States” in 1785. The plates for this map are 54 x 42 cm, which David Bosse argues was larger than any other plates done at the time in America. It is interesting to note that for Norman’s engraving of the Battle of Bunker Hill, which is printed from two plates, the larger plate is 54 x 43 cm.

Under this scenario, sometime in the early 19th century, Trumbull, finding that his European-made prints were not selling well, commissioned Norman to undertake an American-made version, only to be dissatisfied by the results (the print really is not very well made!) and so abandoned the project. This would make sense of a number of things about this print. It would explain who would be willing to put up the money to sponsor such an elaborate copy of Trumbull’s scene, why only Trumbull’s and Norman’s name appear on the plate, why there are so few of these prints around, and why Trumbull made the comment to Madison about American engravers not being able to produce a large print of sufficient quality.

One other scenario is that it was Trumbull who commissioned the print, but much earlier in the process. It took over two years for Trumbull to find an engraver for his Battle of Bunker Hill, so it seems possible that at that time Trumbull might have sent a copy of his painting to America to see if Norman could do the work. If this happened, Trumbull would have seen the quality of the engraving produced and then given up the hope an American could do the work. If this scenario is the true story of this print, the Norman engraving of the Battle of Bunker Hill will actually predate the Müller engraving!

It is fun to try to figure out why the Norman print was made, who paid for it, and when it was done. I have not found any clues in the available information on Trumbull or Norman, but a consideration of the print’s nature leads me to believe that it was Trumbull, at some point, who had Norman try his hand at copying his image. It didn’t work out well for Trumbull, but we are left with this very interesting and puzzling print.
Posted by Chris Lane at 4:29 PM