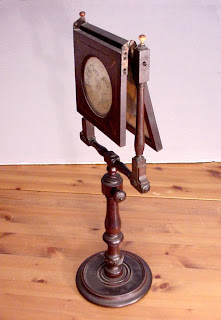 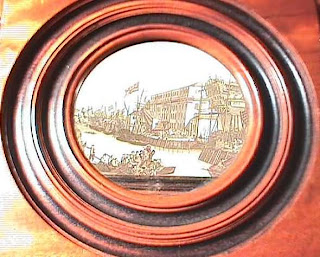 Zograscopes are optical devices used for viewing prints, probably invented around 1750. They were known in England as “optical diagonal machines” and in France as “optiques”. A zograscope consists of a mirror hinged with an optical lens attached to a bracket on top of a stand. The mirror can be angled so as to reflect the print through the lens, allowing the viewer to see an enlarged image of the print. Originally zograscopes may have been used simply for those who were short-sighted, who according to the conventions of the 18th century would not be seen in public wearing spectacles. A whole series of prints, called perspective views or vues d’optique, were developed to be viewed through zograscopes.

The lens of the zograscope enhanced for viewers the magnification and perception of three-dimensional depth of the scenes depicted. A mirror was used so that the perspective prints could be viewed when laid flat, and in these cases the images were viewed in reverse. It is therefore not unusual that the scenes shown were drawn in reverse, and there is also often a title printed in reverse along the top, allowing the viewers to quickly read the title. There was usually further text at the bottom of the prints which could be read by the operator of the optique for the benefit of his audience. This text often appeared in several languages, as the audience for these views was an international one.

The most characteristic feature of the perspective views is their emphasized linear perspective, done to further intensify the enhanced appearance of depth and illusionistic space in the prints when viewed through an optique. Another attribute of these prints is their bright, often crude hand coloring, applied boldly so to show the tints when viewed through the lens. The prints usually have a series of colors–blue, pink and yellow are common–crossing in bands from side to side, with bright highlights often including red.

The prints were exhibited by traveling showmen in the streets throughout Europe and also were collected by those in the professional and upper classes who had the optical machines at home. There was a great curiosity about the appearance of unvisited European cities and exotic locations in the further reaches of the globe, and these prints were one of the only ways the general public could get a look at the wider world. When displayed in the optique, the prints were able to transport the viewer into a far away place–an unknown city, or perhaps into the midst of a dramatic bit of contemporary history or to the distant past.

The height of popularity of the perspective views was in the late eighteenth century, when images of all parts of the world, as well as biblical and historical scenes, were issued in large numbers by publishers in England and on the continent. Zograscopes were produced throughout this period, but were being sold even as late as the second half of the nineteenth century, by which time they were probably more of a curiosity than a common item for every household of taste, as they were in the eighteenth century. Zograscopes have become quite uncommon and are often misidentified as “Georgian shaving mirrors,” but when found they still work wonderfully when used with original perspective views. 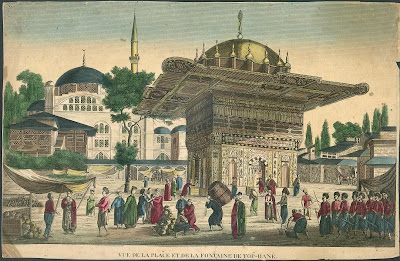 The perspective views are usually quite attractive and are terrific for both decorating and collecting. Their bright colors and intentionally striking designs, often with the visually interesting reversed writing, makes them wonderful decorative art that can be used in a period (i.e. eighteenth century) or modern setting. While some of the views, as discussed below, have fairly high value, many of the European scenes sell for very modest prices, making these some of our favorite prints to suggest for decorating on a limited budget. 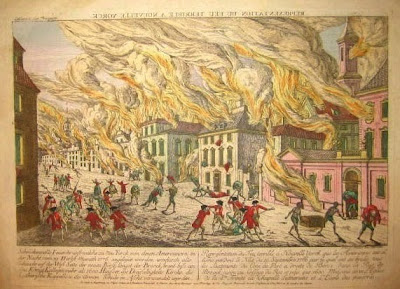 For collectors, the subject matter makes them interesting. Most of the views are European, but there are views of all parts of the world. The images of Europe tend to be relatively accurate, as the audience would immediately recognize incorrect images. In contrast, foreign views--say of Asia or North America--are often simply made up, as the publishers assumed that the buyers probably would never visit the locations nor were that worried about accuracy. For instance, the view of Philadelphia is actually a scene of Greenwich, England, modified slightly and with the only thing about it relating to its alleged subject being the boldly printed title. 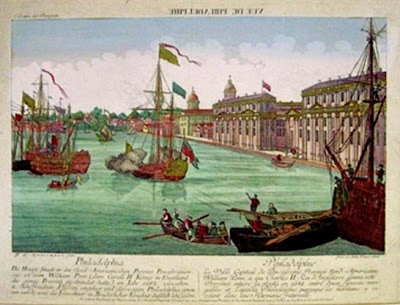 The North American views, of New York, Salem, Boston, and Philadelphia, tend to be quite desirable, though more as curiosities than views, and those of Asia or Africa are also quite collectible. The most desirable are the images of scenes from the American Revolution. While these are as inaccurate as the American views, they are contemporary images of the Revolution and, as discussed in a previous blog, have that immediate historical connection which gives them collector interest and value.
Posted by Chris Lane at 8:00 AM