I took a trip to Washington DC over the weekend and ate in two restaurants which had interesting displays of old prints, so I thought I would write a quick blog on these two places, as well as start an occasional series of blogs on the topic of where one can see antique prints besides in institutions.

The first restaurant was Cracker Barrel, one of my favorite places to have breakfast when on the road. Every Cracker Barrel I have ever stopped in (and there are a lot!) has essentially the same decor: the walls and ceilings are filled with old objects like milk pails, rakes, lamps, and all sorts of other similar objects of the sort one would see if you visited an country antique store or outdoor antique flea market. In among these objects are also lots and lots of "pictures," also of the sort one would find in thousands of antique shops and markets around the country.

These pictures include many items that would be considered "ephemera;" advertisements, posters for various events, and the like. There are also lots of photographs of various sorts. And there are many antique prints in old frames. What type of prints? Every one that I have seen has been of the "decorative" or "frameable" type of print issued in the very late nineteenth or early twentieth century, prints like the chromolithographs issued by the Hoover & Sons firm of Philadelphia.

This makes sense, as one would suspect that given the huge number of prints needed to decorative the Cracker Barrels around the country, these prints were selected for being decorative and not terribly expensive. That is exactly what they are. It is interesting that while I haven't seen any antique prints in a Cracker Barrel that I would say had any kind of significant value, I also haven't seen any outright reproductions. I don't know anything about the various three-dimensional objects they have hanging, but all the prints I have seen are originals from no more recently than the very early twentieth century. As I have discussed in a blog about "decorative" prints, these can be wonderful objects for decoration. I enjoy visiting Cracker Barrel for the food, but also because of the authentic use of antique prints.

The other restaurant I visited over the weekend was definitely more up-market than Cracker Barrel, and, not surprisingly, the prints hanging on its walls were also more up-market. On Saturday night I had a superb meal at 1789 Restaurant, one of the best restaurants in the Washington DC area. I savored the meal, of course, but what I really enjoyed were the many antique prints hanging in all the rooms. 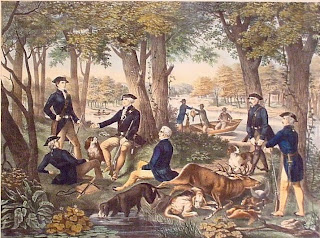 In the main downstairs dining room were prints mostly related to George Washington and views of Washington DC. These included some very nice Currier & Ives prints, a good number of the small steel engraved views from mid-nineteenth century, like those from Hinton's History and Bartlett's American Scenery, as well as a number of the large historical engravings which were so ubiquitous in the nineteenth century. Of particular note was one of my favorite Washington prints, John Smith's lithograph of "Washington and Friends after a Days Hunt in Virginia," and two rare and wonderful lithographed views: the Currier & Ives bird's eye view of Washington and a large view of Georgetown University. 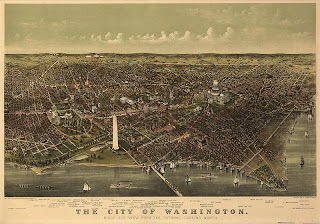 In a side dining room were hanging, almost from ceiling to floor, prints and maps related to the Civil War, including some quite rare and interesting images. The bar area and the rooms upstairs had mostly British themed prints, including sporting prints, early nineteenth century caricatures, and of course, Vanity Fair prints.

Like with Cracker Barrel, all the prints in 1789 were authentic antiques and some would certainly be considered as "decorative." However, given that the rooms tended to have a single theme, and given that many of the prints hanging in 1789 are rare and valuable, the images in this restaurant can be considered as part of a print collection rather than simply prints used for decoration. It is my understanding that the prints were collected by the original owner and one certainly can sense his enthusiasm--and good eye--when one visits this wonderful restaurant.

I always enjoy looking at prints when I come across them in places like these two restaurants, and I probably can be a bit obnoxious when I lean over another diners table to get a closer look at an interesting print, but it is a wonderful thing to see antique prints used in this way. If any reader knows of a restaurant or other non-institutional place where antique prints are used for public display, let me know...
Posted by Chris Lane at 9:00 AM